Vadhya Kala
Vadhyakala, the art with instruments, forms the basics of temple performing arts of Kerala. This art is a combination of mathematics and classical music creating a symphony of the different sounds produced by diverse type of instruments, strictly following Raga & Thala. The theoretical knowledge alone will not help to understand and enjoy this complicated art form. So it should be approached delicately as an oil painting. Keep a distance, or you will be disturbed by the brush patches. The variations in ‘sruthy’ from various instruments will be manifold in a closer scrutiny.
Few guidelines:
As per 'Vedas’ and the Rishies who interpreted them, the concept Thalam is believed to be God given. Lord Siva always carries a musical instrument called ‘Damaru’ which can be equated to modern ‘Chenda’, ‘Madhalam’ ‘Thimila’ and ‘Edakka’. Out of these, Chenda, Mandhalam and Thimila can easily produce the Premier word of Hinduism ‘AUM’ while the Edakka can produce vocal music. In a music concert or in a dance the roles played by instruments are complementary or supplementary, but in Thalavadyangal they are all independent.

Most of the practicing artists in this field are from Marar/Poduval families, a division of Hindu Nair community. Carrying the instrument in one shoulder and a gunny bag with paddy, normally their reward, in the other shoulder was the picture of theses artists in late forties. Now the scenario has changed and the artists are well rewarded in all aspects. Taught and practiced by ‘Guru Kula’ style, each and every artist has a status which is strictly followed by virtue of their artistic talent, skill and interpretation, but not their age.

In a typical Vadyakala, the senior most artist, with Pramanvadhyam (leading instrument), is the conductor of the ensemble. ‘Pramani’, as the conductor is called, will communicate only through his body language throughout the play. The artists on either side of the Pramani will receive the instructions from him and convey it to artists next to them and so on till the communication reaches the entire group. The Pranami will supervise the whole performance periodically by turning left, right and to back.


Panchavadyam is one of the most popular art forms of Kerala and has undergone drastic changes during last 80 years.

The Arrangements: The number of artists varies from 12 to 54 or 55 depending on various factors like duration, place, type etc. The proportion is that, for every Madhalam, there should be double + one Thimila and for every Thimila there should be equal numbers of Kombu & Ela-Thalam. One Edakka is essential. For a larger group the number of Edakka may vary from 2 to 3. The grouping of the artists and hierarchy is strictly followed as shown below. 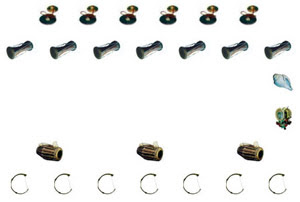 The chief player of each instrument will stand in the center and the next one on the right side and the third one on the left. Edakka will be stationed at right-hand side of the Madhalam. If there is second Edakka, it will be positioned at left hand side of Madhalam. In case there is also the third Edakka, it will be stationed next to the first Edakka. Sanghu will be at right hand side of the first Edakka.

The Vadhyam: The ensemble starts with Sanghu which produces the sound ‘AUM’ twice and on 3/4th way through the third ‘AUM’. Thimila and other instruments except Kombu reproduce the same ‘AUM’. Panchavadyam, which is pyramidal in its rhythmic structure, is divided in 10 Kalams, starting from 896 Aksharakalam as 1st Kalam and ending at 1¾ Aksharakalam as the 10th Kalam. However theses 10 Kalams are grouped in to 3 –
It will take 14 to 15 minutes to complete first Kalam. Here the chief will decide from which Kalam the ensemble should start, where the criterion is the duration available for the entire play. Long vadhyas will start from 1st or 2nd Kalam and short vadhyas will start from 3rd or 4th Kalam. Even though the Thalam followed here is ‘Adantha’, the influence of ‘Chempda’ will be there up to last few Kalams. Starting from the slow and lengthy paces the Vadhyam reaches short and speedy ‘Thripuda’ (the thrilling phase of the play) and ends with a bang. To end this shower of sound there is an exciting piece of art called ‘Thimila Edachil’, which is performed in Chempada Thalam by few Thimilas supported by Ela-Thalams. This is an excellent mixture of skill, speed and sound. 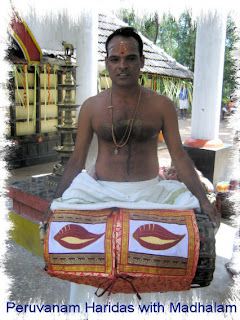 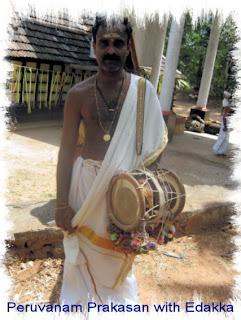 Chempa melangal is the most popular and widely acclaimed Keshtravadhya of Kerala. More than 300 years old, Melam is an integral part of all festivals in Kerala, irrespective of cast or religion. The most important among these melams are ‘Pandy’ (Splendid & Majestic) and ‘Panchari’ (sweet & pleasing) and they may extent up to 5 hours. The leading instrument is ‘Chenda’, Kerala's own instrument. The Chenda is divided into ‘Valamthala Chenda’ & ‘Edamthala Chenda’ (right & left side of the instrument) or ‘Veekam Chenda’ & ‘Uruttu Chenda’. The covering is soft in Edamthala (left side) but is in layers in Valamthala (right side). Chenda can produce multiple vadhyas such as the ‘Devavadya’ using Valamthala and ‘Asuravadhya’ through Edamthala. With infinite range & magnificent sound, ‘Chenda’ is said to above all 18 instruments used in Vadhyakalas.

Generally there are 7 types of melangal namely Panchari, Chempa, Chempada, Adantha, Anchadatha, Druvam and Pandy. Out of these, the first 6 melams are called ‘Chempada Melangal’ and they are one way or other closely associated and modeled after the premier one ‘Panchari’. Of all these melams, Pandy is most distinctive. Two more melams, ‘Navam’ & ‘Kalpam’, were developed by a Maestro in this field, Sri Kumarapuram Appu Marar. There are only very few artists who can perform all these melangal with an equal ease as this requires total dedication, interpretation, meditation and talent.

The Arrangement: The melangal are performed in a tight format without any compromise and each and every instruments has equally important role to perform. The conductor will see that all are in tune & time with one another. Kurumkuzal and Kombu may be in equal numbers with Uruttu Chenda. The Ela-Thalam must be in double and Veekam Chenda should be triple the number of Uruttu Chenda. The ratio of Veekam to Uruttu may be 1:6 for magnificence.

The positions are arranged in such way as to have a direct interaction between the artists. Kurumkuzal is holding the wand, supported by the Kombu. So both these artists must have direct Eye contact with the Leader.

Common features: All these Chendamelangal have common features such as use of same instruments, fixed positions and duties, etc. This play is performed in ever increasing tempo and proportionally decreasing number of beats per cycle. The role and hierarchy of the Pramani are identical in Vadhayam and Melam.

Panchari - Performing on Chenda with one stick and bare hand (right as well as left) is the simple identification of Panchari. Divided into 3 steps in 5 Kalams, the concert starts at 96 Aksharakalam and ends at 6 Aksharakalam. The 3 steps are classified based on the mode of using the stick. The first one ‘Nerkol’ (slow) is beating directly parallel to the surface of Chenda. On to second step, the beating will be in swinging mode with a slight inclination. This stage is called ‘Thakkida’ (Normal). The third step is ‘Kuzamarinja’ kalam (fast). The wrist of the hand will fully rotate in this stage. ‘Kaalamidal’ (take off) is the foundation of Panchari and the blue print will be ready after the 12th ‘chempada vattam’ (Aksharakalam divided by 8 is one chempada vattam).

The melam starts (is airborne) at the second part of ‘Vilambakalam’ (pathikalam) and is called ‘Varthikam’. The melam then smoothly travels through 2nd, 3rd, 4th & 5th Kalam in 6, 3, 1½ and 3/4 chempada vattams respectively and completes in ‘Theerukalasam’. The 5th kalam is entirely different and more jubilant. Listening to Panchari melam performed by an eminent is like watching the waves from the sea shore. Waves start as small ripples in the far, increasing in height slowly and steady as they approach, and end with a splash as they hit the shore.

Thalam: Except for the 5th Kalam which is in Panchari, all other Kalams are in Chempda.
Ragam: Sankarabharanam.


Pandi - Clearly perceptible and widely acclaimed, Pandimelam attained towering heights because of its presentation in ‘Elajitharamelam’ of Paramekkavu, an integral part of Thrissur Pooram. The Pandimelam is distinct from other Chenda melamgal. The fundamental change is the use of both sticks while performing. Pandimelam is like climbing a stair case – a fixed number of steps, then a landing zone, again a fixed number Of Steps and a landing and finally you reach the top of the tower (the peak of the performance). The takeoff is in an entirely different format called ‘Kolumbal/Koottiperukkal’ which is an enchanting experience.

It is difficult to confine Pandy to Kalam or Aksharakalam. Pandy is designed in such a way that it is accelerating step by step very systematically. During the course of time it will cover up the kalams (not strictly time bound). The beauty of Pandy is its ‘Kalasams’. Normally after 4 Thalavattam, Kalasam is performed in next 3 to 6 thalavattams depending upon the speed of the melam. Kalasa thalavattangal is done through Nerkol which displays the nobility and depth of the Pandi. The speed and number of beats are directly in proportion. With 100 and odd Chendas in Nerkol, complemented by another 50 and odd other instruments- the grand finale of Pandymelam is a breathtaking experience.


Thayambaka is another illustrative art form in Vadhyakala and more or less a one man show. Supported by Ela-Thalam, Thayambaka is performed using Chenda, and is a stimulating experience for the audience. Classified as a pure temple art Thayambhaka is staged in between the ‘deeparadhana’ and ‘athazapooja’ of the temple (just after the wee hours of the day). The venue is between the ‘Valiya balikallu’ and the ‘Balivattom’. The duration is normally 1¼ hour and may vary from ½ an hour to 1½ hour.

The Arrangements: In front of the holy lamp the supporting artists are lined leaving the center space for the Maestro, as follows

The program starts with a typical style ‘Kottivekkuka’ by Valamthala Chenda, supported by Elatahalam. Starting from ‘Thripuda’ and turning to ‘Ekathala’ (eka means one) the melam enters the last phase of the prologue. At this time, the master of the ensemble enters and positions at the center and beats twice indicating the start of the concert. From ‘Pathikalam’ (slow pace - Chempadavattom), Thayambhaka steadily travels though various steps like ‘Kooru’ and ‘Edavattom’, the 1st stage and ‘Edanila’ and ‘Erikida’, 2nd stage. After the second stage Thayambhaka ends just like the sudden end of a heavy down pour. Thayambaka can be Single/double/triple/penta depending up on the number of Pramanies. The number of Valamthala and Ela-Thalam may be increased, but the Edamthala remains two.


In a Nutshell - Advaita Vedanta is considered as the culmination of rational thinking in India. The quintessence of this philosophy can be represented by the syllable ‘Aum’. It is also known as ‘Pranava’. The real point of this Pranava lies in the fourth state which is termed as ‘Turiya’ – the measureless one (amantra). It may be noted that all forms of Kerala Vadhyangal somehow accommodate this philosophy. Mathematically multiplying odd numbers with even numbers is Panchavadyam & Pandimelam (7*2=14). And multiplying even numbers with even numbers is Panchari (6*2=12). The melam which uses hand and stick may be considered as ‘Swathika’ (Bhramanya) and which uses both sticks, as in Pandimelam, as Rajaswa (Kshatriya). Combination of Swathika & Rajaswa is Panchavadhyam. The gist of all the melavadhyangal is Thayambaka. One who mastered in Thayambaka can perform any Thalavadyangal.
Posted by Thrissur Pooram Co ordination Committe at 11:15 PM 6 comments: